MSS.009 - Collection of 13th and 14th Century English Land Grants
JavaScript is disabled for your browser. Some features of this site may not work without it. 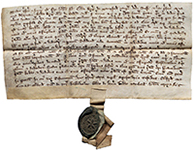 These documents provide tangible evidence of the feudal system of property law prevalent in medieval and early modern Britain and Europe. They date from the end of the reign of Edward I, who was revered by later generations as the English Justinian, after the statutes of Quia Emptores (1290) and De Donis (1285) had made land freely alienable for the first time since the Norman Conquest.

The first grant is for lands to be held by full copyhold tenure – basically an inheritable lease. The second and third are for lesser grants of copyhold tenure limited to the life of the tenant. The fourth grant is that of a guardian passing along an inheritable proprietorship over the town of Chigwell to his ward and nephew, the legal heir. The fifth is a grant in fee simple. The sixth document is also a grant in fee simple, but this one has been confirmed by a jury. The jury confirmation indicates that the grantee must have been dispossessed by another before he could take up occupancy and therefore brought a suit to secure his seisin in the granted land. The confirmation by a jury makes this particular document especially valuable as a specimen of English legal history.