Judge Charles E. Wyzanski Collection
JavaScript is disabled for your browser. Some features of this site may not work without it. 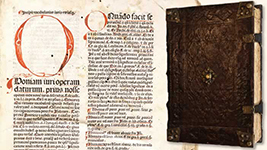 On December 1, 1941, Wyzanski was nominated by President Franklin D. Roosevelt to a seat on the United States District Court for the District of Massachusetts vacated by Hugh Dean McLellan. Wyzanski was confirmed by the United States Senate on December 16, 1941, and received his commission on December 19, 1941. He also served as a public member of the National Defense Mediation Board from 1941 to 1942. He held several teaching posts during his judgeship, serving as a lecturer in government at Harvard University from 1942 to 1943; lecturer in law at the Massachusetts Institute of Technology from 1949 to 1950; Herman Phleger Professor of Law at Stanford University from 1973 to 1974; and Pappas Distinguished Scholar at Boston University Law School in 1986.

Wyzanski served as chief judge of the District of Massachusetts from 1965 to 1971, assuming senior status on September 1, 1971. and continuing to serve not only as a District Judge but by invitation on eight of the eleven circuits of the U.S. Courts of Appeal until his death in 1986.